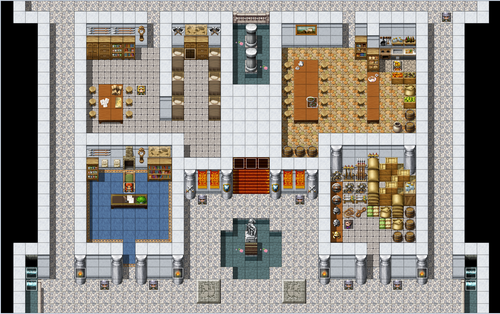 Today, during the livestream hosted by MGN, we furthered the Main Quest. The player sets out from Forrestia to find a Knight in Castleton, and after asking around... a lot... you eventually locate him. This Knight seems to notice that Harold's kind of a jerk, and sets the boy out on a quest that we'll flesh out later.

Generia's starting to look pretty good. I fleshed out the introduction a little more as well, letting players see that the village kind of treats him as if the water he walks on is gold. This leads to a very inflated ego, and poor treatment in regards to Therese, his childhood friend. As we continue, there will be more fleshing out of the quests, scenes, and storyline, until we have ourselves a very nice, very steady game.

Now I've just got... the rest of the game to go. >.> At least I'll have the livestreams to drive me forward!

The most Generic JRPG you'll ever play.